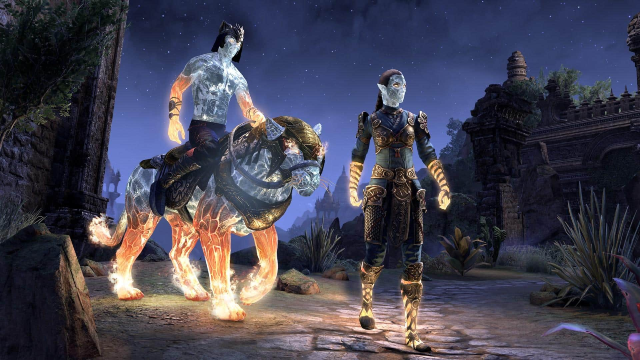 The Temple of the First Cat, located high above and to the southwest of Merryvale Farms in Elsweyr, is a sanctuary dedicated to the Dragon god of time. Some say that Alkosh famously shouted and defeated Pelinal Whitestrake here, and for centuries, the monks who resided in the temple peacefully kept vigil in the mountains. However, when the Dragons were unleashed upon Elsweyr, everything changed.

“When the Halls of Colossus were opened up, a golden Dragon by the name of Nahviintaas came to the Temple and proclaimed he was Alkosh himself,” explains Mike Finnigan, ESO’s Dungeon Lead. “The dutiful monks willingly accepted his rule, and so Nahviintaas called in two other Dragons to lord over all of the monks in Sunspire.”

While many in the temple eagerly accepted Nahviintaas’ claim, some saw through his lies and were enslaved for speaking out. You and your team must help Mojha and his fellow captives confront the Dragons and their followers to free Sunspire from their influence.